ALL THE ANNOUNCEMENTS OF JENKINS WORLD 2017

We are excited to announce that this year, for the first time, Kiratech has attended Jenkins World, the event dedicated to the Continuous Integration & Delivery tool that took place in San Francisco on August 30th – 31st and saw about 2.000 attendees.

On August 30th, Kohsuke Kawaguchi, the creator of Jenkins and CTO of CloudBees, delivered the opening keynote highlighting the transformation that has occurred in the Jenkins community this year, through innovations such as Declarative Pipeline and Blue Ocean, the new Jenkins UX.

Then Sacha Labourey, CloudBees founder and CEO, held a speech discussing the new updates from CloudBees and some exciting news about the transformations that are occurring cross-industry as a result of DevOps and continuous delivery adoption. He announced one of the most important highlight: the new CloudBees solution, called DevOptics.

CloudBees DevOptics is a solution for delivering end-to-end application delivery information, creating a comprehensive view of the software delivery process. DevOptics collects data from on-line software channels to generate a complete overview of the application delivery process based on essential information and indicators. In this way, a company will be able to identify which tools, applications and teams are involved, and where it is achieving a ROI, which are the possible areas for improvement and where increase collaboration.

On August 31st, day two of the conference, Jez Humble, CTO at DevOps Research and Assessment LLC and co-author of “The DevOps Handbook, Lean Enterprise and Continuous Delivery”, discussed how to implement DevOps principles and practices and how to overcome typical obstacles.

We are going to highlight the most important points covered during the keynotes in the following blog post. Hoping you’ll enjoy it!

At first at the conference Jenkins wanted to report multiple milestones achieved this year, in particular:

“Cloudbees is in Jenkins what Red Hat is to Linux” told Jean-Philippe Briend, Architect solution of the Cloudbees France to clarify the role of the company.

“The uptake in Jenkins usage continues to set record numbers, and Jenkins innovation is accelerating dramatically,” said Kohsuke Kawaguchi, Jenkins founder and CTO at CloudBees. “In 2017, we saw Declarative Pipeline and Blue Ocean introduced and they have quickly been adopted by the community — gaining tremendous traction and realizing immediate acceptance.”.

The other major announcement made at the Conference concerned the new CloudBees Jenkins Enterprise release. The solution is focalised on managing teams and adopting the pipeline to create software in a reproducible and standardized way, while allowing teams to choose the right tools for each project to increase the productivity of the organization. The new version features the entirely new user experience (UX) based on the open source Blue Ocean project mentioned above, that enables organizations to develop their DevOps initiatives through an intuitive interface.

With this new release, organizations can quickly integrate new projects and teams with preconfigured security and integrations embedded in code repositories, accelerating their DevOps process.

The updated version of CloudBees Jenkins Enterprise offers more possibilities for integration with development teams: it offers in fact integrations to over 1,400 DevOps tools and technologies.

James Dumay, director of product management at CloudBees, said “the new user experience is designed from the ground up for team productivity, and it can be easily used by technical professionals, as well as nontechnical users”.

Moied Wahid, Director of developer experience at PayPal, declared "Our developers started exploring Blue Ocean, and they started loving it. There was a huge pull from our engineering community and a push from the infrastructure side.".

"Continuous delivery is helping organizations turn their digital transformation dreams into reality," remarked Harpreet Singh, vice president of products at CloudBees, in a statement. "It gives them the speed and agility to spin up new application projects that deliver value and support the business needs”.

Patrick Chanezon, member of the technical staff at San Francisco-based Docker Inc., declared that Docker is using Jenkins to continuously build the Docker product: "We're building both Docker Community Edition and Docker Enterprise Edition using Jenkins.”. "Docker and Jenkins are like peanut butter and jelly for developers and ops to modernize their traditional applications.".

Last but not least, Cloudbees is introducing Jenkins Advisor, a free tool that provides a database based on Jenkins environment information. It analyses the Jenkins nodes and measures their state of operation. Available in SaaS mode, Jenkins Advisor allows you to download a configuration at regular intervals. 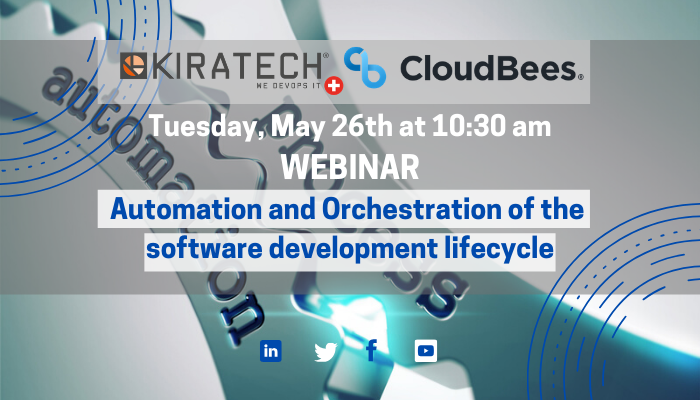 How can we make sure that the software development lifecycle works in a manageable, auditable and clear way without a continuity solution?

Learn how to automate and orchestrate your software development lifecycle to improve your organization IT and...

END_OF_DOCUMENT_TOKEN_TO_BE_REPLACED 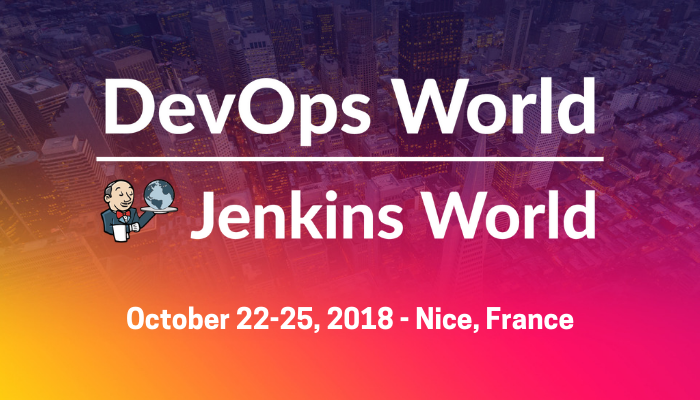 Last October, we enthusiastically attended Jenkins World Europe 2018, the main Jenkins Conference that this year took place in Nice. We can confirm that the Event has been amazing, full of news and inspirations concerning DevOps, Continuous...

END_OF_DOCUMENT_TOKEN_TO_BE_REPLACED 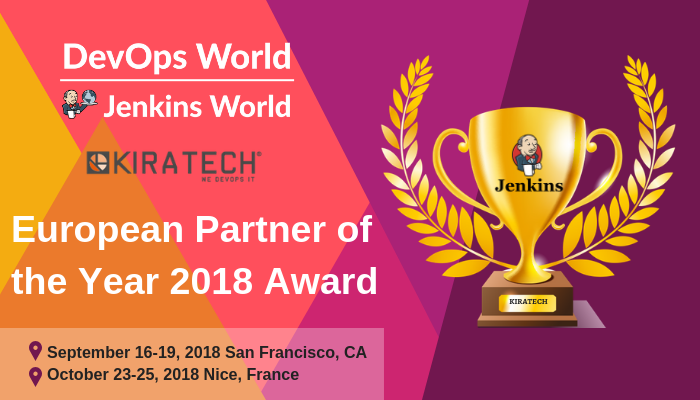 We are pleased to announce that Kiratech has been rewarded “European Partner of the year” at CloudBees Innovation Awards at DevOps World | Jenkins World 2018 that was held in San Francisco from 16th to 19th of September.