All the announcements at DockerCon 2017 in Austin

In a tradition stretching back two years, Kiratech couldn’t miss DockerCon 2017 in Austin, always enthusiast of learning new things and hear to all the special announcements! Here below we show you the abstracts of the main topics discussed during the Day 1 and Day 2 Keynotes on April 18th-19th.

When the General Session started, Ben Golub, CEO of Docker, took the stage to show his presentation. He started with an overview of the first 4 years of Docker and of the differences between 3 years ago and now (since the first DockerCon). Docker usage in the world has impressively grown:

Golub talked then about the Docker Open source project changes over the last 3 years, mentioning that the stakeholders and the nature of the project have progressively changed (anticipating a part of Solomon Hykes announcements).

He then thanked all the Docker Community members, the contributors, maintainers (you can see our DevOps Expert Lorenzo Fontana among them!!!) and mentors who support the Docker Project every day.

Solomon Hykes, CTO and founder of Docker, went on the stage: he focused his talk on reiterate the Docker mission: the world needed tools of mass innovation, and there are some rules that the “best tools” should be subject to. They should in fact:

And these features are also the basis of the difference between Docker Enterprise Edition and Community Edition.

Hykes underlined then how Docker strives to streamline and removes friction in the development cycle, following a three-step process:

Hykes made also some examples of this process. The first example referred to container images that are too big: the answer to this process are multi-stage builds that, leveraging a single Dockerfile and a single build command, allow to create minimal run environments.

The second example is the difficulty in taking apps from the desktop to the cloud. The solution here is called Desktop to Cloud, which allows you to connect to Docker cloud-based swarms directly from the desktop UI and enables a built-in collaboration between Docker Cloud and Docker ID.

The focus then shifted on Docker for Operators. The first aspect that Hykes discussed is security, and how hard it is to move to production securely. In particular the challenges for a secure production are:

Hykes pointed out that “a platform is only as secure as its weakest component”; this means that you have to worry about every component, and according to Hykes that’s exactly what Docker has been doing over the last year. Hykes discussed the work that Docker Inc. has done going on the different “Docker for X” platforms. Not every platform provides in fact a Linux subsystem, so Docker needed to work with other companies to build a secure, lean and portable Linux subsystem. And all this work led to LinuxKit:

Other companies that contribute to LinuxKit are IBM, Microsoft, Intel, Hewlett Packard Enterprise, and the Linux Foundation. At this point Solomon, underlying that it’s 3 years that Docker and Microsoft are working together, welcomed on the stage John Gossman, Azure Architect at Microsoft.

John focalized his talk first on Hyper-V Isolation, created in order to connect Virtual Machines to Containers (in particular it supports Windows-based containers), and then he announced the following step: Docker and Microsoft have worked together to solve the need of insert a Linux container with Linux Kernel on Windows, launching also Hyper-V Hypervisor.

Hykes re-takes the stage, and announced the live open source of LinuxKit on the stage: he made the LinuxKit repository on GitHub finally public.

Solomon started then talking a bit about the container ecosystem and the related Docker’s commitment. He believes that “if the container ecosystem succeeds, Docker succeeds”. He gave an overview of the evolution of Docker’s participation in the container ecosystem growth over the last few years: in 2013 Docker adopted a pioneer model with the standardization of applications distribution and known 10s of projects, 100s of contributors 1.000s of deployments and 0-100M of hub pulls; in 2015, with cloud native apps on Linux server the ecosystem and a production model made by “open components”, it grew to 100s projects, 1.000s contributors and 10.000s of deployments. The Components ecosystem is growing every day and Containers are spreading to every category of computing – so we can say that the Container ecosystem “goes mainstream”, and it needs to scale. 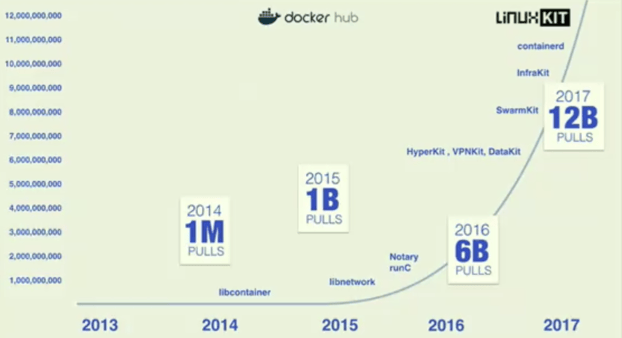 The solution is to assembly all Docker Project components into open source themselves. The result is the Moby project. The Moby project is a framework to assemble specialized container systems without reinventing the wheel. It’s a library of 80+ components that you can use and re-use with your own assemblies. 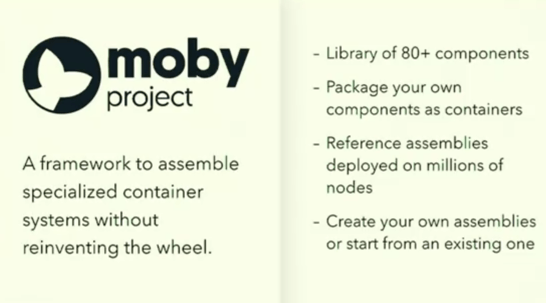 The project has reference assemblies that you can use unmodified, or that you can build upon or customize to create your own custom container systems. Docker will use Moby for all of its own open source development (for collaborators, contributors, etc..). Moby will be an open place community-run and will leverage a governance model inspired by other successful projects (like Fedora). Moby is designed to work well with existing projects; there’s no requirement to donate code to Moby.

So what does Moby mean to you? According to Hykes:

Following up on this discussion, Hykes invited Rolf Neugebauer to help him demonstrating the flexibility of Moby. Rolf made 2 demos, the first on a single system and the second on distributed systems, getting them distributed in the cloud. He demonstrated that with Moby you can collaborate to assembly and get the ecosystem to the next level.

With the end of the demo, Hykes closed the Day 1 Keynote.

Ben Golub went on the stage to kick off the day 2 general session of DockerCon 2017. He started reviewing some proposals for Docker logos, announcing an imminent changing in Docker Logo.

Then he focused his talk on Docker for enterprises and he made an overview of the most famous Docker customers. According to results of a research made by ETR, Docker appears “off the charts” in terms of adoption and market penetration within the enterprise. Golub sustains the bi-modal IT structure model, saying that Docker’s customers need can be synthetized with the word speed, that means moving faster through the future.

Introducing the great benefits and improvements that customers can see approaching Docker, both from a microservices-first architecture and from a traditional applications architecture, Golub stated that Docker enables you to adopt future technologies more easily and to protect investments in older technologies. To do this, Docker needs to be diverse—supporting different platforms and different environments.

At this point, Golub welcomed Swamy Kocherlakota from Visa on the stage. Kocherlakota, after displaying some Visa numbers and strategies – based on making electronic payments accessible to everyone and everywhere, on driving innovation through open platforms, on deploying fast and on having a “just in time” infrastructure - started discussing Visa technical approach. He showed how virtualization was inefficient and caused over the last years to Visa long infrastructure provisioning times, patching and maintenance and big infrastructure footprints. With Docker and Microservices Visa wanted to break this pattern and to simplify deployment improving developer productivity and standardizing the way of packaging and deploying apps. The idea is to try to move all developers and application groups to a “container-first” microservices-based architecture (called also Tetris-like infrastructure) deploying granularity, memory footprint, load balancing and operationalization.

Golub resumed some Docker “lessons learned” over the years:

This focus on diversity can be linked to the efforts thatDocker is spending in guarantee security on the various Docker Editions (Docker for Mac, Docker for Windows, Docker for AWS, etc.), and to CaaS (Containers-as-a-Service).

Golub reviewed then the announcement regarding the Docker Store and certified third-party container images, taking into consideration in particular Docker Enterprise Edition, that includes Docker for AWS, Docker for Azure, etc..

He mentioned the major expansions of Docker Editions this week, that include: Docker running on z Systems and Power Series, and Docker for GCP. Docker, being on every major cloud in the US, is also making a partnership with Alibaba Cloud to provide Docker in Alibaba’s public cloud and in Alibaba’s private cloud offering (Aspara Stack). Consider that more than 60% of the 20 billion dollars daily transactions in the world happen via Alibaba, and Alibaba’s platform is built on Docker.

At this point, Golub invited Mark Cavage from Oracle to talk a bit more about Oracle’s decision to put some Oracle software products (like Oracle Database, Oracle WebLogic, Oracle Coherence, Oracle Linux, and Java) available on the Docker Store. The idea of Oracle was to satisfy all the developers who think “..if it’s not on Docker I won’t download it” and to make these products usable by as much people as possible. Moreover the Docker Store is a guaranty of quality.

Golub came back on the stage, and started talking about the effort Docker is putting to modernize traditional applications program in order to accelerate portability, security and efficiency for existing apps, without modifying secure codes. This program in particular is sustained by reliable key partners like Avanade, Microsoft, Cisco, and HPE.

Golub introduced another use case: he called Aaron Ades to talk, who’s system engineer at MetLife, the holding corporation for the Metropolitan Life Insurance Company. Aaron expressed how hard is working with legacy, in particular during digital revolution and dealing with different customers’ needs. Thanks to Docker and DevOps, that changed the company culture, MetLife was able to react and:

With Docker and Microservices they moved workloads easily to Azure, consolidated virtual machines and made a massive operational leverage. They demonstrated in this way that “Even old elephants can dance”.

At the end Ben thanked all and closed the day 2 keynote.

Thanks to all people who will read this article; we invite you to leave some comments or message if you enjoyed it! And…see you at the Next DockerCon! 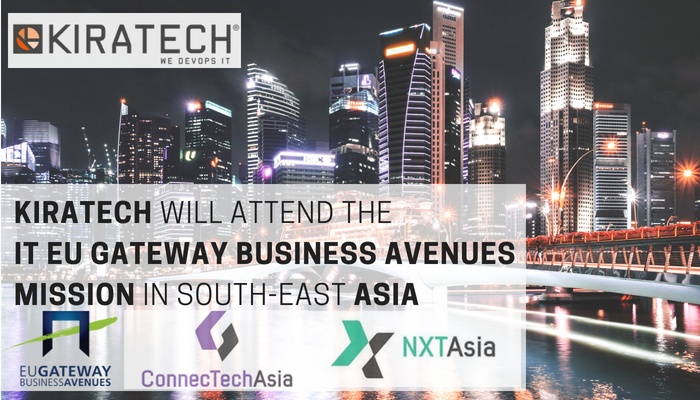 We are proud to announce that Kiratech is one of the 50 companies selected in Europe to participate in EU Gateway | Business Avenues mission about Information & Communication Technologies, that will take place from 25 to 30 June 2018 in Singapore...

END_OF_DOCUMENT_TOKEN_TO_BE_REPLACED 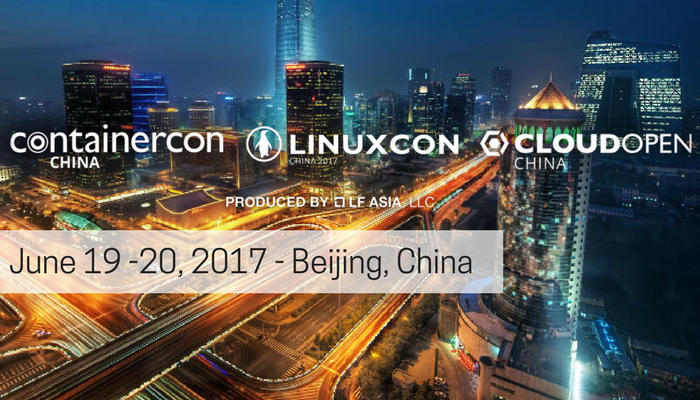 This year, for the first time, we had the pleasure to attend LinuxCon 2017 China, the main Linux Conference organized by the The Linux Foundation that took place from June 19th to June 20th 2017 at the China National Convention Center in Beijing,...

END_OF_DOCUMENT_TOKEN_TO_BE_REPLACED 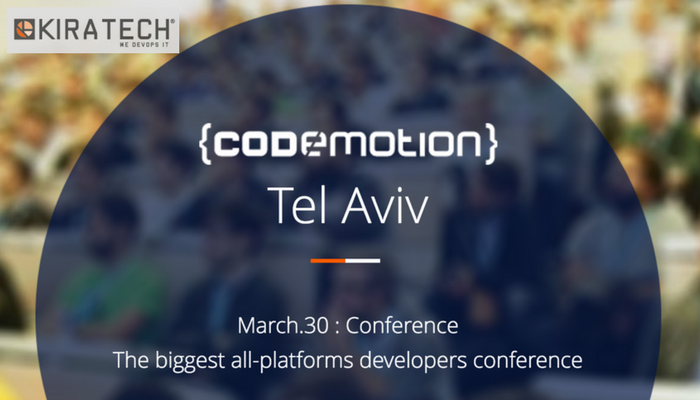