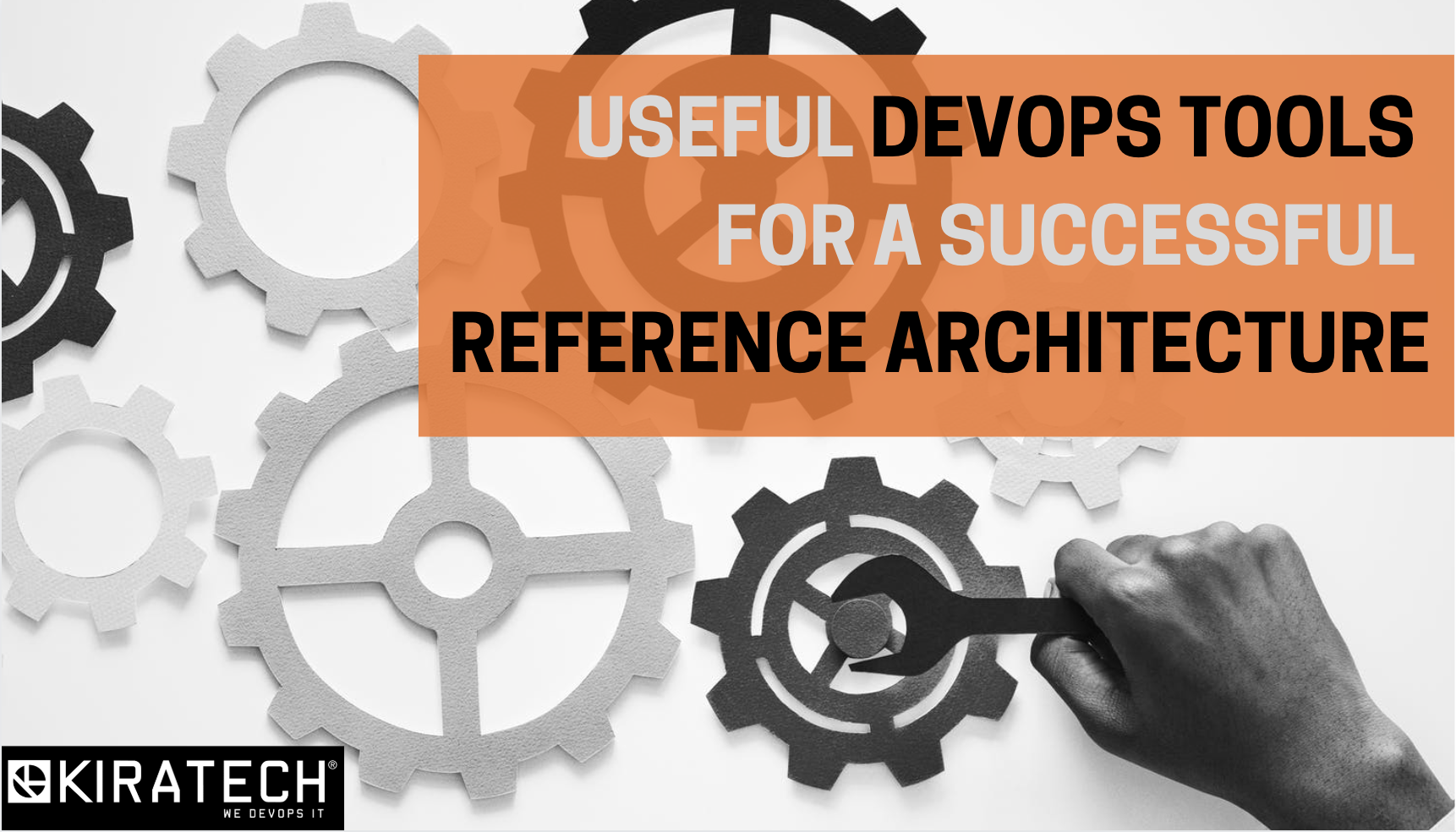 In the previous blog posts, we have deepened concepts like DevOps methodology, Cloud, Security and their connected tools and practices, by explaining how Digital Transformation influenced and radically changed the company’s approach to these three areas with the aim of obtaining a more flexible and agile applicative development.

But how DevOps Tools interact with each other? Which is the role model which firms should aspire to?

Let’s analyse together what we consider the ideal Reference Architecture, which is the standard that, based on our experience, we believe to be the best to make different DevOps Tools engage in order to implement an automatized, fast, efficient and safe software life cycle.

The architecture we are referring to is the following: 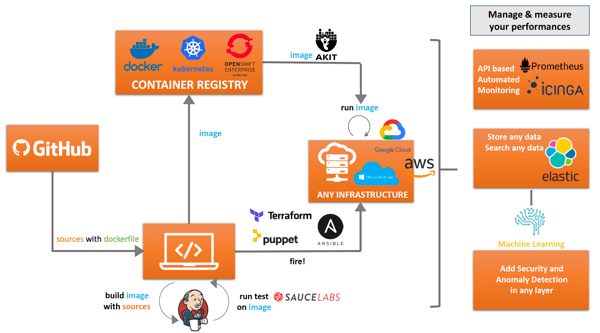 At first glance, it may look like an intricate scheme, but we can guarantee that, once you understand its underlying logic, it may become your reference point as well.

Let’s begin by saying that, before even starting any process, the best thing to do is to define the standards, which are the basic rules and procedures to which refer in the management of the activities.

Thus, let’s imagine that your company or your IT department find themselves to:

In order to act in an optimization, automation and efficiency point of view, standard and univocal actions must be identified. These actions must be undertaken every time it is intended to start with this kind of processes. In this case the action must be always the same: make a commit and save the GitHub code, which is the most known and spread platform for the code hosting and for the collaborative development based on Git DVCS (Distributed Version Control System).

In this same perspective, after receiving the input, the process should be defined and addressed through a central tool, which describes its logic and communicates the system how to proceed. Therefore, this transition should involve all the development software phases in DevOps style, from writing to configuration, from test’s stages to distribution and releases’ ones. Jenkins is the tool that we identified for this key role.

Hence, inside Jenkins there will be inserted the so-called pipelines, which will define the process, i.e. the set of the software components drop-down connected, so that the result of one element (output) would be the entrance of the one which immediately follows (input).

We cited so far the two main DevOps facilitators, which ensure that the beginning of the process will be correct and standardized. At the same time, by the way, they need a specific investigation, in order to understand how they act and which are the technologies that stand at their basis.

GitHub may be identified as a halfway between a social network and a file repository. It is also used for Open Source and private projects.

We may adopt it in order to save technical documentation, the applicative code or the definition file, the infrastructure configuration (hence, not just software as an application), Ansible playbooks and pipelines, all divided in different repositories, according to the involved areas.

As far as the development flows are concerned, GitHub stands its basis on a process called GitHub Flow: this system allows to keep tracks of the software story, in a clear and legible way, helps the growth and permits the teams to divide the efforts on the different implementation, correction, cleaning and release phases, by granting to each of them suitable spaces inside the repository and appropriate schedule inside the flow. All of this is constantly monitored, enabling to rapidly intervene on eventual critical issues at any level of the process.

What stands at the basis of this tool is the concept of TEAM, namely its being extremely cooperative during the code revision phase, claiming several native integrations with other tools. GitHub allows to keep the entire process inside a unique platform, by letting developers work with the instrument they favour, including the ones for continuous integration, hundreds of app and third parties’ services.

Another fundamental functionality that we adopt is that of Project Management (often is not fully exploited), in which we can find a Kanban Board connected to the different open issues or pull requests, that may be transversal between the various projects and each of them may be organized in assignable to one or many team members. During these passages, it is possible to comment, attach file or images, by creating a complete and organized historical, all of it in a Wiki logic, which allows a great collaboration between the different actors. This last point is very crucial for us that wed DevOps and Open Source visions and that is one of the main characteristics for which we recommend GitHub as an excellent solution for our customers. In particular, we propose GitHub Enterprise for bigger realities, i.e. the on premise GitHub version, provided as a virtual appliance performable in cloud or on all the major hypervisor.

One of the most recent and important GitHub news is represented by, besides Microsoft acquisition, the ACTION. They may be combined up to 100 GitHub Action in order to create challenging workflows through definite actions in the repository and, also, they are all highly customizable. Today this functionality is available only in the Limited Public Beta version.

It is the most famous system for Continuous Integration and Continuous Delivery, which enables to automatize the application delivery life cycle, by increasing the productivity and the quality of the applications. It relies on a master-slave architecture and it is very simple to install and configure.

Also, here we can find the corresponding Enterprise version, i.e. Cloudbees Core, which:

As explained above, Cloudbees is the central tool that involves all of the software development phases in a DevOps optics. One of the reasons why it is the most used solutions is that of related to the quantity of plugin for an interaction with other Tools (today, more than 1.400).

What we discussed about is just the basis of reference architecture, which is our DevOps Architecture “ideal” and involves additional passages and technologies such as:

Follow us in our next blog posts, in which we will specifically deepen these technologies, connecting them to the development flow and to the entire architecture, founding how, by following this scheme, the process would become so precise and controlled that it will reduce the mistake chance to the minimum.

If you want to learn more about the DevOps Tools, download our FREE GUIDE:

Today we live in a continuously technology, economic and politic evolving era, and the market players essentially need to adapt fast to this period of changing. These things occur especially in the financial and banking sectors, in which take place...

END_OF_DOCUMENT_TOKEN_TO_BE_REPLACED

Today, farms are starting to invest in DevOps methodologies and practices, since they have understood their importance in making development stages faster, reliable and with fewer mistakes.

END_OF_DOCUMENT_TOKEN_TO_BE_REPLACED

The 7 main actors for a successful DevOps Strategy

Lots of companies are implementing a DevOps strategy to make the communication between developers and operations faster and smarter in order to accelerate the software development phases and to make business more agile. It often happens that during...